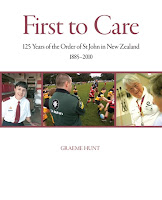 First to Care: 125 Years of the Order of St John in New Zealand, 1885–2010, brings to life the story of one of our most ubiquitous and vital charitable organisations.
This highly illustrated, full-colour book is the history of both an organisation and the changing society that it has served over 125 years.

Author Graeme Hunt unearths new information about the founding of the former St John Ambulance Association in 1885, the creation of its complementary arm, the former St John Ambulance Brigade, in 1892, and the development of what is now one of the country’s leading healthcare organisations.
The heavily illustrated trade paperback provides a vivid account of public-spiritedness, enterprise and innovation by people involved in St John over the past 125 years, peppered with occasional disputes and setbacks along the way.
St John chief executive Jaimes Wood said First to Care was not only a frank account of the first 125 years of St John in New Zealand but also a social history of the role of an iconic organisation in national life.
“From Graeme Hunt’s history we see how St John developed into a dynamic organisation capable of serving the needs or a varied and demanding community.The challenges St John faced in 1885 — developing a strong organisation drawing on the collective skills of volunteers and paid staff, working with governments and healthcare providers and winning the hearts and minds of the public — are those we face today.
“Graeme has identified the ability of St John to meet the challenges and adapt to a changing world. The book is an important part of explaining where we came from, where we are and where we are going.”
Graeme Hunt said St John had gone through many changes since 1885 but remained true to its twin international mottos, Pro fide (for the faith) and Pro utilitate hominum (for the service of humanity).
“St John invented and popularised ‘first aid’ as we know it. It provided medical assistance from the sidelines of our sports fields from as early as 1891 and it played a leading role in disaster relief from its formative days. From humble beginnings it established a nationwide ambulance service that today is the envy of the St John fraternity worldwide.
“In 1885 St John’s success depended heavily on the service of volunteers — ordinary New Zealanders who gave up their spare time to serve their fellow citizens. Today volunteers remain crucial to the success of the wide range of services St John offers.”
The Author
Graeme Hunt is an Auckland-based writer who specialises in New Zealand business, history and politics. His books, including The Rich List, Black Prince and Spies and Revolutionaries, cover topics as diverse as public-sector accountability, old money, white-collar crime and business history.
Publishing details:
First to Care: 125 Years of the Order of St John in New Zealand, 1885–2010
Author: Graeme Hunt
ISBN: 978–1–877514–03–6
Format: 344 pages, trade paperback
Publishers: Libro International, an imprint of Oratia Media Ltd, Auckland, and Waddington Press Ltd, Auckland, for the Most Venerable Order of the Hospital of St John of Jerusalem. RRP $60
www.oratiamedia.com and www.graemehunt.co.nz
Queries should be directed to Peter Dowling, Libro International, at 09 817 2951
Posted by Beattie's Book Blog at 12:48 pm