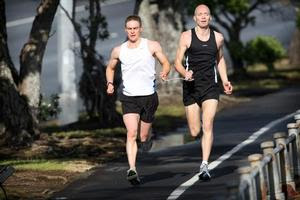 There are people who do amazing things, and some just don't know when to stop.
Take the 48-year-old blind athlete extraordinaire Rob Matthews. Neither age nor disability is slowing him down. In fact, the pace is picking up, to what might be called extreme degrees.
The Englishman, now married to a New Zealander and living in Auckland, has a string of Paralympic running achievements on his CV that mark him down as a legend in this arena, and a prized MBE awarded to him by the Queen in 1987 for services to disabled sport.
A potted biography on his website explains: "Rob has driven a racing car at high speed at Brands Hatch, he skis and plays golf, football and cricket."
The Rob Matthews catch-cry should be: "But wait, there's more."

Matthews, who has also won a 2009 world Paralympic triathlon silver medal for New Zealand, is becoming increasingly well known in his adopted homeland, especially through the release this month of his autobiography Running Blind and television appearances.
His next race is the Auckland half marathon on November 1, where he aims to run 1hr 22m and break his own race record for a blind runner.
Read the rest of this inspiring story at NZH.
Footnote:
For Aucklanders who would like to meet Rob Matthews and buy his new autobiography link here for an invitation from Tme Out Bookstore in the Mt.Eden Village.
Posted by Beattie's Book Blog at 4:07 pm