Novel idea for the future - Marbecks to open concept store in Dunedin
Herald on Sunday Oct 25, 2009
By Andrea Milner 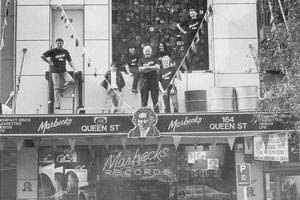 Left - Marbecks has been in business for 75 years.
Music and movies will fuse with books and coffee next month when music specialist Marbecks opens a concept store in Dunedin.
Marbecks' managing director Roger Harper describes it as a "boutique Borders", complete with a cafe. If it is successful, more stores will be rolled out around the country.
Alongside this move, The CD and DVD Store, which bought Marbecks three years ago, is being rebranded as Marbecks next week.
"We are increasing the amount of merchandise we do - T-shirts, headphones, posters and books - so the brand name of The CD and DVD Store is a bit restrictive," Harper says.
Locally owned and operated, Marbecks turns 75 this month, and Harper says it is a major initiative for the company to get into books and provide "a real shopping experience" in the retail space, as well as embracing technology and providing a full range in the online and digital space.
The marbecks.co.nz website has been trading for more than 10 years, and Harper says the company is ramping up the online side of its business, introducing books, hardware and T-shirts to its existing music, movie and game products.
Its own music download service is also in the pipeline.
"Initially, we viewed downloading as a threat, now we are working it into our business strategy, seeing it as an opportunity - we're not going to sell more CDs tomorrow."
Andrea Milner's full article can be read at the Herald online.
Posted by Beattie's Book Blog at 2:17 pm

And our very own Bruce & Janice Caddy are moving to Dunedin to get the store up and running. Bruce says he's looking forward to hosting author events there too.

How wonderful. One of 'the babes' (girls who help with the writing of my book) has just been employed. They've just snagged a great kid who loves books, music, movies and is a whiz on the computers (she created my blog). I feel a bit sorry for UBS but hopefully there's enough room in town for both of them.

And, Dunedin is so full of talented writers and musicians.

What good news both of these coments carry. It augurs well for Marbecks new venture.
Great that Bruce Caddy is coming back into the book trade - he is a highly experienced, lively and enthusiastic bookseller and I am delighted with this news.

Hi, some lovely comments here about Bruce & what we are planning to achieve in Dunedin. We are planning some exciting new initiatives for this store and it is a honour to have someone of Bruces calibre onboard. A great big thanks to John McIntyre for putting Bruce onto us. I will ensure Beatties blog is kept abreast of developments.

Hi thank you all for your lovely comments. We are truly blessed to have somone of Bruces calibre come onboard. Big thanks to John McIntyre who pointed Bruce our way.
We are very excited about the new Dunedin site it is a new chapter in Marbecks 75 year history.
Regards
Chris
Product Manager, Marbecks