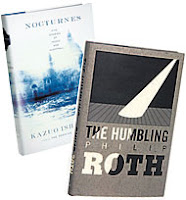 NOCTURNES Five Stories of Music and Nightfall
By Kazuo Ishiguro 221 pages.
Alfred A. Knopf. $25.
THE HUMBLING
By Philip Roth 140 pages.
Houghton Mifflin Harcourt. $22.
Fernando Ariza/The New York Times
Before he emerged in the 1980s as one of Britain’s most talented — and acclaimed — young novelists, Kazuo Ishiguro was an aspiring singer-songwriter, an admirer of Bob Dylan and Leonard Cohen, who played in British folk clubs and the Paris Métro. His career as a musician never took off, and he enrolled in a creative writing course at the University of East Anglia run by Malcolm Bradbury. In 1982 he published his first novel, “A Pale View of the Hills;” in 1989 he won the Booker Prize for “The Remains of the Day.

Kazuo Ishiguro Photo of by David Levene/Guardian News and Media

In his new book, “Nocturnes,” Mr. Ishiguro gives us five stories that read like movements of a larger musical piece. All concern aspiring or failed musicians (or music lovers), who delude themselves about their talents or their prospects. All address the author’s favorite themes: the consequences of self-delusion, and the emotional acrobatics people perform in order to remain in control. And all radiate Mr. Ishiguro’s signature tone of wistful, elegiac regret.
Unfortunately for the reader, these stories — which, curiously, won rave reviews in Britain — do not share the exquisite narrative command, the carefully modulated irony or the elliptical subtlety of Mr. Ishiguro’s strongest works like “Remains of the Day” and “Never Let Me Go.” Instead they read like heavy-handed O. Henry-esque exercises; they are psychologically obtuse, clumsily plotted and implausibly contrived.
“Come Rain or Come Shine” depicts a middle-aged teacher’s visit to two married classmates, and shows him absurdly impersonating a dog, in order to try to cover up his vandalizing of a diary he’s surreptitiously read. “Crooner” tells of a young musician’s encounter with a once-famous singer named Tony Gardner, who says that he and his beloved wife of 27 years, Lindy, are separating because he wants to make a comeback, and comebacks, he ridiculously asserts, require that you “change some things you love” like a longtime wife. And “Nocturne” depicts a bizarre encounter between Lindy Gardner and a saxophonist named Steve, who meet at a Beverly Hills hotel, where they are both recovering from plastic surgery.
Read both reviews at NYT.
Posted by Beattie's Book Blog at 6:35 am