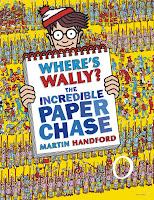 WHERE'S WALLY?
It is 22 years since Wally (Waldo in the US & Canada) burst on the book publishing scene.
Today there is a whole series of children's books created by British illustrator Martin Handford and the latest in the series, Where's Wally? The Incredible Paper Chase has just been released in NZ and Australia by Walker Books, NZ rrp $29.99
The new title as with those that came before consist of a series of full-page illustrations of hundreds of people typically depicted during a frenzy of activity; each illustration depicts a unique location, time period, or activity.

The goal for the reader is to find Wally, pic left, hidden in the group. He is always dressed in a red and white horizontally striped shirt, blue pants, and bobble hat, carries a wooden walking stick, and wears glasses.
In this new book there is the additional task of finding a piece of paper that Wally has dropped from his notepad in each scene.There is also the bonus of a board game within the book and a fold out press out Wacky Wally Circus Show. 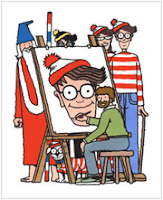 Another winner from Martin Handford, (self portrait right, with Wally & friends),that lots of youngsters will be delighted to find in their Christmas stocking.
There's talk too of a "Where's Wally" feature length film for release in late 2011.