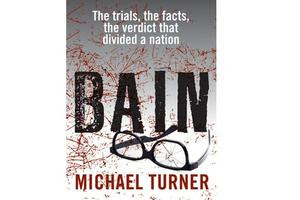 BAIN BOOK - PUBLICATION CANCELLED
Friday afternoon I received the follwing brief statement from Harper Collins NZ publicity supremo Sandra Noakes:
Just to let you know that Bain by Michael Turner, due to be released on 24 November, has been cancelled. HarperCollins Publishers have agreed with the author not to proceed with its publication.
No explanation but then today the NZ Herald carried the story on its front page:
Bain book axed after publisher's legal check-up
NZ Herald, Saturday Oct 24, 2009, By Jarrod Booker
A book on the David Bain case has been canned a month before it was to be published.
The book, by former television journalist Michael Turner, was to have been released on November 24.
But this week, Turner and publisher HarperCollins agreed not to proceed with the project, titled Bain, which Turner describes as a narrative on the Bain case"from go to whoa".
The High Court retrial in which Mr Bain was acquitted on June 5 this year of murdering his parents and three siblings was to be the climax of the book.
Neither Turner nor the publisher was prepared to say what led to the cancellation, but the Weekend Herald understands it came after the manuscript was examined for legal risks.
Turner, who followed the case from its early days, said he was not disappointed by the decision.
He said the book was a "work in progress".
"There will still be a book published. I have some work to complete, and when I do that, I will be presenting it for publication again."
He refused to say whether he was talking to other publishers.
Read the Jarrod Booker story in full at NZH.
Posted by Beattie's Book Blog at 10:25 am