The Riddle of the Rifleman 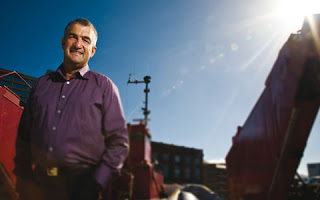 Wellington writer John McCrystal, entrepreneur and adventurer Bill Day (above - photo Unlimited) and maritime artefacts conservator Jack Fry spoke to a group of maritime heritage enthusiasts on Tuesday night, in the process of launching ‘The Riddle of the Rifleman’, a report published by the Maritime Archaeologists’ Association of New Zealand (MAANZ).

In 1986, Bill Day was a member of an expedition searching for the fabled gold ship, the General Grant, on the west coast of Auckland Island. The divers located a shipwreck in a site that roughly matched the presumed location of the General Grant, and another expedition that Day led in 1996 performed a comprehensive salvage of the site. As they worked, it became clear that this was a smaller, previously unknown vessel.

John McCrystal heard Bill telling this story on a visit to the Auckland Islands in 2008, and his curiosity was piqued. Lavishly illustrated with images supplied by leading photographer Mike ‘Wilco’ Wilkinson, ‘The Riddle of the Rifleman’ presents an account of the salvage, the conservation of the artefacts raised and McCrystal’s four-year search through documentary sources for clues to the ship’s identity.

The report is available from MAANZ for $25: for a copy, contact  Malcolm McGregor, MAANZ secretary, on malcolm.mcgregor@paradise.net.nz.
Posted by Beattie's Book Blog at 2:41 pm