Four weeks to go until Dinefwr, festival of literature and landscape 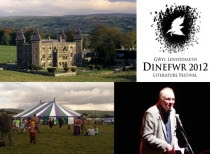 Major new bilingual festival in Wales
Friday 29 June – Sunday 1 July
www.dinefwrliteraturefestival.co.uk
Leading names from literature, music and comedy will come together in west Wales this summer for the Dinefwr Literature Festival, the first bilingual festival of its kind.

The festival promises to keep eyes, ears and minds buzzing all weekend, with over 100 events celebrating all aspects of the spoken word – from leading authors from Wales and beyond to rappers, comedians, cult musicians and up-and-coming talent. Set in the stunning surroundings of the National Trust’s Dinefwr Park & Castle, with its 18th century parkland and medieval deer park, the festival offers a stunning backdrop for those looking for an escape from the daily grind.

Lleucu Siencyn, one of the festival’s directors and Chief Executive of Literature Wales, comments: “Now that summer’s finally here, we’re all thinking about booking our weekend breaks and festivals. The Dinefwr Literature Festival, held in one of the most beautiful areas of the UK, will give you more for your money than almost any other festival. This is a festival with everybody in mind – families, music fans, readers, writers and those who love the great outdoors.”

National Poet of Wales Gillian Clarke will open the first day of the festival in an event with leading Welsh poet Paul Henry and award-winning poet and writer Philip Gross.

Literature events continue with the inimitable Howard Marks, with his one man show ‘An Audience with Mr Nice’, lyrical artistry from POETica, a group including Mr Phormula, the Welsh beat boxer, rapper, producer and BBC Radio 1 regular and an exclusive family-friendly performance with the Brautigan Book Club, inspired by cult writer Richard Brautigan’s poem Please Plant This Book. Welsh speakers can enjoy a conversation between Welsh Children’s Poet Eurig Salisbury and writer Tom Anderson as together they search for new surfing terms in the Welsh language.

Kids and adults alike will be entertained by an exploration of science and the fiction of time travel and alien biology with author Mark Brake and rapper Jon Chase in the Science fiction of Dr Who. Before bed, children will be regaled with stories by Horatio Clare and Tom Anderson as part of the festival’s nightly Naughty Boys’ Storytime.

Night owls will then be treated to an evening of live music. Super Furry Animals’ front man Gruff Rhys will headlining on Friday night, alongside a performance from The Staves, who will have just returned from supporting Bon Iver’s US tour.

Early risers can take time out by painting watercolours of local birdlife with cult illustrator Matt Sewell. A little later in the morning, lovers of literature and landscape can also join travel writer Horatio Clare as he leads a walk exploring the relationship between nature and writing.

Other literary highlights on Saturday include former UK Poet Laureate Sir Andrew Motion talking about Silver, his new sequel to Treasure Island, and Dylan Thomas’ granddaughter Hannah Ellis appearing at the festival in conversation with his biographer Andrew Lycett.

For those wanting to learn more about Welsh culture, journalist Jasper Rees will be chatting to writer and poet Tony Bianchi on the subject of Identity. Continuing the theme, Neil Ansell will also be reading from Deep Country: Five Years in the Welsh Hills and music writers and producers Iestyn George, Dyl Mei and Owain Llŷr will talk about the Welsh music scene.

Kids can join creative workshops with the Hunga Munga collective, learn how to make pizzas in a wood fired pizza oven with Taste from the Fire and find entertainment in the form of the fabulously bearded children’s writer Philip Ardagh  and Wales’ first ever Young People’s Laureate Catherine Fisher. Fans of Philip Pullman can check out the chapter-heading vignette prints from His Dark Materials, as part of the Fantastical Beasts exhibition in Newton House.

In the evening, there will be comedy from Josie Long followed by a music and performance salon hosted by The Brautigan Book Club, featuring H. Hawkline, Gruff Rhys, Martin Carr. Topping off the entertainment will be a musical performance from visionary rock musician Julian Cope.

Sunday begins with songs from Jeb Loy Nichols, dubbed the ‘high priest of country cool’ by Rolling Stone Magazine. Later on, the day gets louder as Mercury Music Prize-nominated singer and producer Ghostpoet, singer-songwriter Emmy the Great and Welsh chart-toppers Cowbois Rhos Botwnnog take to the stage. Any budding Welsh rappers can also take part in a rapping and beatboxing session with Ed Holden, Aneirin Karadog and Rufus Mufasa.

Wendy Cope, one of the nation’s favourite poets, will be performing before lunch. Plus, The Charlatans’ Tim Burgess will be speaking to Pat Long about his new book, Telling Stories, as part of Caught by the River’s programme of music and talks.

Stimulating conversations in the afternoon include Gillian Slovo, president of English PEN, talking to Swansea University’s Dr Tom Cheesman on Welsh PEN and conflict writing. Kids will be kept busy by Small World Theatre, as it re-enacts the tale of The Fisherman and the Mermaid with a giant puppet and flock of bicycle powered seagulls. If that wasn’t enough, there will also be illustration and poetry workshops, as well as nature walks with the Wildlife Trust.

Tickets
Both weekend and day tickets are available for the festival. Adult Weekend passes are £65, with a discount for National Trust and Literature Wales members. Adult Day Tickets start at £25; children under 5 go free, and weekend and day tickets for children aged 6-16 are £10 and £5 respectively. Camping tickets are an additional £20 per tent for a maximum of four people sharing.
Posted by Beattie's Book Blog at 9:00 pm