Lee Child Says Give Tom Cruise a Chance as Reacher 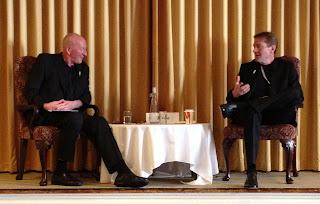 Best-selling thriller author Lee Child says fans of his fictional hero Jack Reacher should suspend their anger at Tom Cruise having been cast as the tall and strapping man of action.
Cruise has been filming the first Reacher movie, One Shot, which is due for release in December and is based on the ninth book in British author Child's hugely successful series of novels.
After years of anticipation at seeing their hero on screen, devotees of Reacher - famously 6'5" with a 50-inch chest - were underwhelmed when 5'7" Cruise nabbed the part. So much so that there are online message boards and whole Facebook pages howling in protest, including one called Tom Cruise Is Not Jack Reacher.
The casting was not working
But speaking at Crimefest in Bristol, Lee Child (above, pictured right) told an audience that the star could well surprise them. In a humorous interview session with author/critic Peter Guttridge, he revealed that the film had been held up for a long time by problems in finding the right star to play Reacher.
"Inevitably, when you transfer a book to a movie you have to give up something," Child said. "But the casting was the delaying factor. It was not working."
Brad Pitt and George Clooney were said to have been among those in the running. "There were loads of actors pitching for it," Child said, "including one I won't name - Keanu Reeves."
Big, smart and ferocious - that's Reacher
The producers, with action specialist Don Granger chief among them, wanted a bankable star who could translate Reacher's three distinguishing characteristics to the screen - his forbidding stature, his intelligence and his ferocity.
In the end, Child said, they decided they were not going to get all three. But Cruise has notched up three Oscar nominations for his performances and has nailed the all-out action stuff in the Mission: Impossible films. So, it was felt he could do two of the three - be the smart operator and convince in the action scenes.
The author, who is 6'4", joked that he'd had nightmares that when he finally met Cruise, he would have to crouch down to shake his hand. In the end, however, everything went well - "He was a perfectly normal-sized guy," Child said.