The Bungalow at No.2 Riverside Road - reviewed by Maggie Rainey-Smith 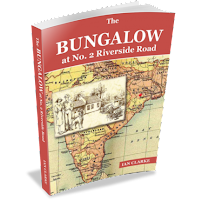 The Bungalow at No.2 Riverside Road
By Ian Clarke
Published by Oceanbooks Ltd, 2012
RRP $19.95

The Bungalow at No.2 Riverside Road begins around the eve of World War II in a small Indian town Kirampur, in what was then known as the area of Bengal.   It is a Colonial story with a good narrative drive, straight-forward and conventional but filled with details that substantiate the author’s very intimate connection with India.  The novel doesn’t seem to be making claims to be anything more than it is, with a forward-moving and very conventional narrative that keeps you interested, with some nice observations and a reasonable level of intrigue and drama – if perhaps a wee bit over-construed.
Peter Tennant is a Supervisor in an engineering works in Kiampur and when one of his colleagues Stuart (who also lives at No.2 Riverside Road), dies unexpectedly he returns to England and visits Stuart’s family.  He meets his future wife and after some level of romantic suspense, she joins him in India (this is sort of a plot spoiler, but revealed in the blurb on the back of the book).
Stuart’s death is the beginning and the backdrop to the ongoing intrigue and drama.   Some of the more dramatic events that unfold (and they are very dramatic and quite violent at times), are rendered like a good old-fashioned who dunnit style story, so that as a reader you are kept somewhat distant from the full emotional impact of some quite awful events.  At times I felt a bit surprised at the deft way death was simply another plot twist and I wanted more emotional connection.
On the other hand, the portrayal of Peter’s wife Rachel, who comes out from England barely knowing her husband, on a kind of romantic adventure, is rather well done.  I liked the delightful detail of  her surprise and disappointment at finding that No.2 Riverside Road is nowhere near a river, and then, the endless hours she has to try and fill – getting used to five staff to wait on the household so that she spends part of her mornings dodging the home-help and keeping out of their way.   I felt that Rachel’s story worked well along with her encounter at ‘The Club’ with the expats – all fairly easy to imagine, but nice details and obvious insight… some nice comic touches.
The canvas is one of the shifting political allegiances at the time, with Independence looming and the infighting between the Muslim and Hindu population.   These are rather big topics and the story focuses more closely on intrigue and drama and corruption at the local level.   You can feel the author’s obvious affection for India and there is an Anglo Indian and Hindi glossary at the back.
Where the author really hits his stride, is in the conversations like this:
Rachel is bored and restless and decides to head out from the house by herself to post a letter.   She’s not meant to leave the house on her own and wander around.   She comes across a milk shop and can’t resist going in just to do something to buy something, and decides on a newspaper.
“Oh yes, madam,’ the young man looked relieved. “You are wanting yesterday’s newspaper or today’s newspaper?”
“Today’s,” she said, pleasantly surprised.  Normally the paper did not arrive till the following day.
“Madam, very sorry, madam.”  He shook his head.  ‘For today’s newspaper, you must kindly return again tomorrow, madam.”
Conversations like this, between Colonial and Indian characters that reveal the author’s local knowledge and insight.    These work well and reveal a lot about the era and attitudes.  Although, I couldn’t help feeling though that the author had missed a wonderful opportunity to reveal more of the colour, drama, and sensory experiences of India.  Nearer the end, Rachel stumbles on a market and this is quite a dramatic time in the novel, but I wanted to feel and smell and see more.   Too, near the end some quite dreadful events unravel and they are rendered pretty much as narrative drive, rather than the reader feeling deeply connected to the horror.
If you are interested in pre-Independence India from a Colonial perspective and enjoy a conventional whodunit-style read, then this book may well be the one for you.
Footnote:

Maggie Rainey-Smith (right) is a Wellington writer and regular guest reviewer on Beattie's Book Blog. She is also Chair of the Wellington branch of the NZ Society of Authors.
www.maggieraineysmith.com
http://acurioushalfhour.wordpress.com/author/maggieraineysmith/