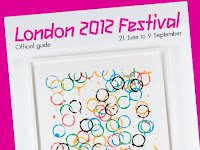 The London 2012 Cultural Olympiad is the largest cultural celebration in the history of the modern Olympic and Paralympic Movements. Spread over four years, it is designed to give everyone in the UK a chance to be part of London 2012 and inspire creativity across all forms of culture, especially among young people.

For more details on the programme, to download the London 2012 Festival official guide and to sign up for information visit www.london2012.com/festival
Posted by Beattie's Book Blog at 6:18 am