A Conversation With Chip Kidd and the First Look at Batman: Death by Design 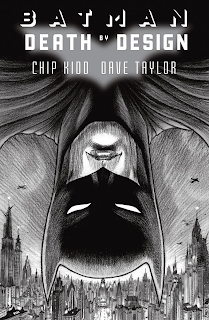 Chip Kidd, the legendary author and designer, is the writer behind a new Batman graphic novel called Death by Design. It's a very smart and brilliantly illustrated black-and-white film turned comic book that tells a story of a Gotham crumbling at the foundations by corruption. Reading this book, I felt like I was in an old one-room movie palace, watching a lost Carol Reed/Orson Welles collaboration. But when I'd look around, I'd still just be on my couch reading a comic book.
Kidd and illustrator Dave Taylor blended the comic medium and it's most popular character with all the aesthetic of a World's Fair that rocketed this near the top of my favorite Batman books. Some might dismiss it as being boring or not action-packed enough, but my guess is that none of those people have ever seen Casablanca either.
I had a chance to speak with Chip Kidd about the project and our conversation is transcribed below. Further down, you'll see an exclusive sneak peek of the book. If you're a fan of both Batman and classic noir cinema, this book is a must read.

This is an abridged version of the conversation, you can read the full interview at Big Shiny Robot!

BY: Reading the book, it feels like you are watching a movie. It's very cinematic. It has this sort-of heavy noir influence. It's almost a little bit surprising to hear that your influences, or your inspiration, what got you into Batman is more sixties, seventies Batman. It feels much more much more forties. At least with reading this book.
CK: Well, I would hope so. My fandom and this particular project are not two separate things, but this book is its own thing. And I really very much wanted it to feel like a really good film from the thirties actually, from like the late thirties. And the art direction to the artist, Dave Taylor, was what if Fritz Lang had a big budget to make a Batman film in 1938? What would it look like? We never specifically say what year it is, but it very much meant to feel like it's set back then.