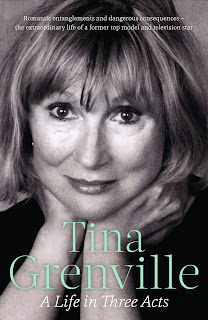 ‘Kristine has an excellent character with a bright attractive personality. She has decided dramatic ability and a gift of interpretation which will serve her well in the career she has chosen. I am confident of her ability to achieve success.’ Testimonial, Miss Clark, Wellington Girls’ College

Tina Grenville began life as Kristine DeLacy. Born into privilege but out of wedlock, she weighed just 2 pounds (900 grams) of heavily subsidised butter at birth. Her prematurity meant that she struggled with poor health in early childhood and didn’t start school until she was nearly seven years old.

Described by her mother as ‘very self-conscious, nervous and highly strung’, it wasn’t a very promising start for the little girl who longed to be an actress. But adversity can foster courage and determination, and Tina Grenville had both, in spades. She also had grit. Just as well, for she was going to need all the fortitude she could muster throughout her life, as she rode the proverbial rollercoaster and endured the best and worst of times.

Tina Grenville was thrust into the limelight at the tender age of 19 with a young baby in tow, when her charismatic and dashing former husband disappeared in mysterious circumstances from a Wellington wharf one morning. Rumoured to have drowned while trying to swim across the harbour, to win a bet after partying hard all night, it was a huge news story. Sitting in the Wellington Coroner’s Court, Tina had to suffer the humiliation of hearing the police read out a long list of her husband’s misdemeanours.

Widowed before she was 20, but blessed with exceptionally good looks and a steely determination, Tina Grenville rose above the gossipy, insinuation-fuelled headlines to forge a hugely successful modelling and acting career. Audacious and fun, Tina Grenville cut a dash in New Zealand society, and once, back in the 1970s, famously took off her trousers – ladies weren’t supposed to wear trousers in those days – and calmly walked into the dining room at DeBretts.

Tina Grenville won Model of the Year in 1964 and went on to become one of the most recognisable faces on New Zealand and Australian television. Along with son Ashley, she appeared on Channel Nine’s Logie award-winning series, The Godfathers and sequel The People Next Door, during her 14-year stint in Australia. Returning to New Zealand in 1980, she hosted Good Morning for Northern Television and worked for Wellington’s Downstage Theatre. She also appeared on Gloss, Homeward Bound and as a panellist on Selwyn Toogood’s iconic, Beauty and the Beast show.

But while Tina’s career went from strength to strength, her personal life was plagued by gossip and controversy. Family life was tempestuous and now, with three children to look after, not to mention husbands – past and present – making constant demands on her time, energy and resources, it wasn’t long before the ‘black dog’ barked at her door. Yet despite the upheavals, the emotional and financial uncertainty, Tina never gave up and not only survived, but thrived.

In mid-life, while still continuing with her acting career, Tina Grenville became a successful businesswoman. Having cut her teeth with Madam Louise Charlton of Le Normandie restaurant in Wellington – where she mastered the (basic) art of French cooking – Tina started up a private supper club, Dining by Arrangement. She ran her business out of her late nineteenth-century villa, in the wilds of Karekare, and it was a huge hit. Later, she oversaw the building of a mud brick cottage in nearby Piha, which set the stage for her second business, The Beautiful Bed & Breakfast Co. This won the 1998 BNZ Business Award for Best Accommodation out West and was later featured on high-rating television programme, Location, Location, Location.

Tina Grenville: A Life in Three Acts is an inspiring, entertaining and tender memoir; one that proves the adage, ‘it ain’t over until the fat lady sings’; in the case of Tina, the fat lady was a long coming and if life was a performance, then she hadn’t yet reached the last act.

Tina Grenville was educated at Wellington Girls’ College. After leaving school with University Entrance and the school’s cup for drama, she gained her Royal Academy letters to teach classical ballet and her Trinity College qualifications to teach speech and drama. She started work as a radio actress and went on to become a household name in New Zealand and Australia, as a photographic and runway model, and actor.

Tina now lives in Piha with her husband, Tom Cagwin. Her most recent work was playing Tim Finn’s mother in the 2010 film Predicament, for which she gained a nomination for Best Supporting Actress at the AFTAs (Aotearoa Film and Television Awards). 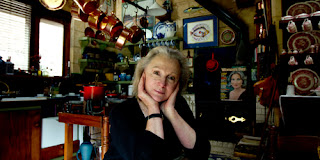 Posted by Beattie's Book Blog at 4:26 am