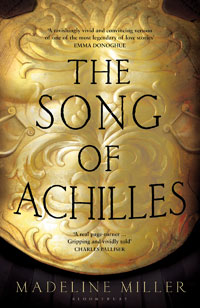 19.15pm, London, 30 May 2012 – American author Madeline Miller has won the 2012 Orange Prize for Fiction with her debut novel The Song of Achilles (Bloomsbury).

2012 marks the seventeenth year of the Orange Prize, which celebrates excellence, originality and accessibility in women’s writing from throughout the world.

At an awards ceremony at the Royal Festival Hall, Southbank Centre, London - hosted by Orange Prize for Fiction Co-Founder and Honorary Director, Kate Mosse - the 2012 Chair of Judges, Joanna Trollope, presented the author with the £30,000 prize and the ‘Bessie’, a limited edition bronze figurine.  Both are anonymously endowed.

Joanna Trollope, Chair of Judges, said: “This is a more than worthy winner – original, passionate, inventive and uplifting.  Homer would be proud of her.”

The Orange Prize for Fiction was set up in 1996 to celebrate and promote fiction written by women throughout the world to the widest range of readers possible. The Orange Prize is awarded to the best novel of the year written in English by a woman.

The judges for the 2012 Orange Prize for Fiction are:

Stuart Jackson, Communications Director at Orange, said: “This year’s shortlist was wonderfully varied and international but even from such an exceptional shortlist, there can only be one winner – many congratulations to Madeline Miller.”

Madeline Miller
Madeline Miller was born in Boston, MA, and grew up in both New York City and Philadelphia. She attended Brown University, where she graduated magna cum laude with a BA and MA in Classics. She has also studied at the Yale School of Drama specialising in adapting classical tales to a modern audience.  Since graduation she has taught Latin, Greek and Shakespeare, both at her high school, The Shipley School in Bryn Mawr, PA, and elsewhere. Madeline began writing fiction when she was in high school, and has been working on The Song of Achilles, her first novel, for the last ten years. She currently lives in New England, where she teaches Latin and writes.

The Song of Achilles
Greece in the age of Heroes.  Patroclus, an awkward young prince, has been exiled to Phthia to live in the shadow of King Peleus and his strong, beautiful son, Achilles.  By all rights their paths should never cross, but Achilles takes the shamed prince as his friend, and as they grow into young men skilled in the arts of war and medicine, their bond blossoms into something far deeper – despite the displeasure of Achilles’s mother Thetis, a cruel sea goddess.  But then word comes that Helen of Sparta has been kidnapped.  Torn between love and fear for his friend, Patroclus journeys with Achilles to Troy, little knowing that the years that follow will test everything they hold dear.

The awards took place in The Clore Ballroom of the Royal Festival Hall, central London and guests toasted the announcement of the winner at a champagne drinks reception courtesy of Taittinger.  In addition to the Orange Prize for Fiction winner announcement, aspiring novelist Jennifer Cullen was named as the winner of the Orange/Grazia First Chapter Competition for unpublished writers.
www.orangeprize.co.uk
Posted by Beattie's Book Blog at 7:16 am