The American writer’s astonishing new novel, about a teacher whose bank-robbing parents sent him to live with a fugitive friend, is his best yet

Wide open spaces: Richard Ford has written about a family whose lives and ambitions straddle the wilds of the border between the US and Canada. Photographs: Brenda Fitzsimons and Casenbina/Thinkstock/Getty 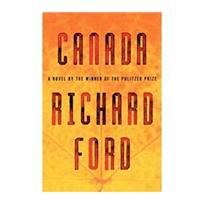 FROM THE OPENING three sentences of this book and on through a long, candid, always heartfelt narrative, the Mississippi-born writer Richard Ford has further elevated his considerable art, as well as that of the contemporary American realist novel, to an astonishing new level. “First, I’ll tell about the robbery our parents committed. Then about the murders, which happened later. The robbery is the more important part, since it served to set my and my sister’s lives on the courses they eventually followed.”
Dell Parsons, the resigned if haunted narrator, looks back 50 years, to 1960, when he and his fraternal twin sister, Berner, were 15. While their father served in the air force, the little family moved from base to base, finally settling, in its habitually uneasy way, in Great Falls, Montana. Bev Parsons originally hailed from Alabama, and remained very much a Southerner, still sounding Dixie. He was a tall, good-looking loser. Although he wanted to be a fighter pilot, he ended up as a bombardier, raining “destruction on the earth”.
As early as the first page, Dell’s narration has the thoughtful, meditative, teacher’s tone that Ford sustains so brilliantly throughout. The writing is deliberate and conveys a convincing feeling of a life spent in minor shock – Dell has, after all, felt his way through the succeeding years which amounted to his life.
The influence of two novels hovers in the background. The first is Henry James’s What Maisie Knew (1897), where James explores the damaged psyche of a child who witnesses a divorce; the second is William Maxwell’s So Long, See You Tomorrow (1980), in which a narrator, again an aged man, looks back with remorse on an attitude he took decades before.
Ford is a rigorous artist. Dell’s voice also recalls the voice of Joe Brinson in Ford’s earlier novella, Wildlife (1990). Like Brinson, Dell was forced from an early age to watch adult mistakes. All Dell had wanted was to go to school. It was his father who had engaged in childish and dangerous fantasies. “We didn’t have a life like most children,” Dell remarks of himself and his sister, “which might’ve involved friends to visit, a paper route, Scouts and dances.” Now an older man and about to retire from a life of teaching, Dell recalls his parents and their marriage, a doomed union of the ill-suited.
The characterisation in this novel is magnificent. Ford has never employed his languorous, slow-moving, rhythmic prose to better effect. Bev was barely educated but was an optimist, “a nonstop talker . . . open-minded for a southerner, had graceful, obliging manners that should’ve taken him far in the Air Force, but didn’t”. That “but didn’t” is telling.
Full review at The Irish Times.
Posted by Beattie's Book Blog at 9:28 pm