Publishers should be proud of their legacy


The word 'legacy' is becoming a term of abuse in the publishing revolution, but a long history of bringing great writing to committed readers is nothing to be ashamed of. 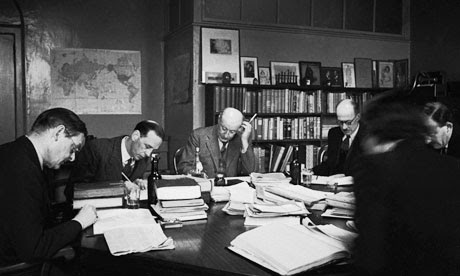 The near-Orwellian debate about "publishers bad, Amazon good" or "Amazon bad, publishers good" strikes me as symptomatic of the degree of revolution taking place in reading. Two recent articles in the Guardian by Barry Eisler and Nick Harkaway offered interesting perspectives, but more than the argument it was the language in both pieces that was striking.

In any revolution, language matters. One powerful word in the digital revolution is "legacy". There is a conscious attempt to employ the word pejoratively, to suggest that existing media businesses – publishers, in the case of books – are going to fail to make the leap to a new world.

In common usage, the first meaning of legacy is an inheritance, or something handed down from the past. A second meaning, more specific and recent, denotes technological obsolescence, or dramatic business-model shift. These two meanings have been fused to imply inevitable irrelevance for those with history, especially in media. This is a sleight of hand that would be sloppy if it wasn't so considered.

Let's deal with technological obsolescence. Media businesses are not technology businesses, but they can be particularly affected by technology shifts. I run a so-called legacy publishing house, Faber & Faber. Most of our business is based on licensing copyrights from writers and pursuing every avenue to find readers and create value for those writers. We are agnostic about how we do this. For our first 80 years, we could only do it through print formats (books); now we can do it through books, ebooks, online learning (through our Academy courses), digital publishing (such as the Waste Land app) and the web. Technology shifts have tended to result in greater opportunity, not less.

Implicit, I suppose, in the pejorative use of the term legacy is that we at Faber, like other publishers, don't get it – "it" being the new economy, the new rules. There is something in this, of course. It's harder to transform an existing business into one with a new culture and cost structure than to start afresh. Any existing business, no matter what old-world strength it has, will fail if it is not bold enough to attack its own DNA where necessary. The ailing photography firm Eastman Kodak is widely cited as a recent example of this phenomenon. But this is business failure due to cultural stasis. There is nothing inevitable in failure for existing businesses, but they have particular issues to figure out: simply adhering to old business practices will lead to failure. Failure will not be because of technology, but through failure to react to technology. In fact, it could be regarded as squandering the opportunity of a beneficial legacy.

Legacy as inheritance, however, describes strength for publishers. In the new world this strength has new possibilities if handled well. Literature is instructive on this. In Bleak House, the Jarndyce inheritance is poison in the obsessive, greedy hands of Richard Carstone. In Great Expectations, Magwitch's bequest to Pip is one of extraordinary generosity, which Pip struggles to live up to. Many publishers' legacies offer strength and opportunity, but these are benefits to be earned, not least through listening to writers and readers; they are not entitlements.

In my view, those who seek to convince consumers of the inevitable irrelevance of existing cultural and entertainment companies do so precisely because these companies have power and expertise. Not power to control distribution any more, but certainly the power to fight for the rights of creative people, to invest in them, and to think imaginatively about what might be made from excellent intellectual property. This legacy offers expertise, resource and power, not weakness, and there are some for whom this is an inconvenient truth. Legacies often lead to envy, after all.

Our legacy at Faber is one of bringing books to readers and creating value for writers. Our legacy is in long-standing relationships with – and investment in – writers and their works, from TS Eliot to Seamus Heaney, William Golding to Barbara Kingsolver, Harold Pinter to Polly Stenham. Our legacy is the ownership of copyright licences (in both print and digital) from more than 80 years of publishing. Our legacy is to know how to create an audience and value for our writers; and, because we've published only what we think is really good, we have a legacy called brand, or rather an authentic identity in the world of writing and reading.

Given the choice of legacy or no legacy, I'll take the legacy. Of course, a blank sheet allows certain freedoms. But these are far outweighed by the opportunities of inheritance, if we manage the death of legacy technologies and market practices. A media business is not a legacy business in the pejorative sense unless it is foolish enough to become one. So, please, let's stop regarding legacy as a handicap; let's just talk about successful and useful businesses today, wherever they come from, be it the past or the present.
Posted by Beattie's Book Blog at 7:03 am