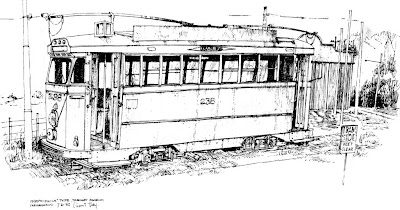 Tukkatukkatukkatukka. Ssssssss. Buzz buzz. Ding ding. Graunch.
I love the weird noises they make, says old Ray McIntyre as he releases the brake with his right hand and eases on the power with his left and old No 239 grinds off on her umpteenth trip out of the Paekakariki Tramway Museum off down memory lane towards the beach.
Mac has his sleeves rolled up and is punching the four levers with precise ease, yet he had never done it until he came out of retirement to look at the old trams he had loved from his youth in Parnell. He stayed and took his motorman’s licence.
He whips the speed control right back as the tram comes up the siding to the points, then clicks power through the four positions to flat tack. We hurtle towards the beach, the leather straps flapping around in the varnished belly of the car, the wagon swaying and rolling on its rails like a ferry plunging into a Cook Strait gale. This is exhilarating stuff, the kind of thing Toad of Toad Hall went for. There is the dry ginger ale disc lurching drunkenly back and forth along its advertising track above the exit. Back come the memories of hanging on for dear life to Mum’s skirts as my Pitt Street childhood tram belted down the hill to the city.
She used to do 35, they reckon, says Mac, eyes gleaming, face flushed with excitement. This old lady really goes if you give her a fair wallop.
She really stops too, as he applies the shoe brake and the great 17 tonne beast shakes and shrieks and shudders to a halt, tossing mere mortals about like leaves in Autumn.
If I put them hard on, says Mac with undisguised relish, you’d be on yer ear. There’s 50 pounds of air pressure in those brakes. Then there’s the magnetic brakes if you pull the power control right back, this big wheel to the right is the hand brake, and if you throw the little red lever out comes the sand on the rails and all the air pressure we have.
That tukkatukka sound?
The motor compressor, for the brakes.
Something else I’ve always wanted to know. How do trams go on the track you want?
Simple. The points where the tracks meet and diverge have a spring and the tram wheels force the iron wedge open on the way through, then it springs back. On the return journey the wedge is pointing the other way so the wheels do not force it open and you go on the other track. Meanwhile up above the trolley pole is directed left or right on its swivel by a wire in the solenoid junction box. You cut off power when you see the white line between the rails.
Mac is leaping out with a poker to demonstrate the mysteries of neutral points, opening up a metal box beside the rail to show the spring; sharing the box with the spring are two toads. Mac is bounding around under the wheel pointing out the capacities of the two bogies and engines, each five tonnes and 50 horsepower, everything bar the ball bearings made at the Kilbirnie tram workshops. It all runs on 600 volts. There, shaking like metal jellies a centimetre above the rails are the magnetic shoe brakes.
Up and round the front, Mac is pointing out the white bar, painted on during the wartime blackout when the headlights could not be used. They are not driving lights, you understand, only a 40 watt bulb. Street lights took care of illumination, the headlight was just to signal its approach.
You know why this end is 239A and the other 239B? No? Simple. So you can identify which end you’re talking about when the motorman makes his report, about, say, a broken window – ‘A end left,’ sort of thing. Now, whadya say to another ride, eh?
Off we go again down the track, Mac as full of juice as the old tram herself, typical of the enthusiasts who have made this the best little tram museum going. 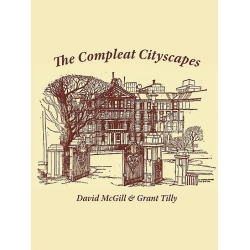 An excerpt from The Compleat Cityscapes - David McGill and Grant Tilly - Silver Owl Press
Posted by Beattie's Book Blog at 7:09 am