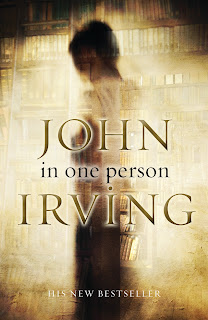 I was disappointed by this latest novel from a writer who has always seemed to me to be on the second-tier of contemporary American literature. I remember enjoying The World According to Garp and after that The Cider House Rules but without that sense of enthusiastic anticipation for the author’s next book. Part of my problem with In One Person might be that I read it immediately after the latest masterwork by Richard Ford: Canada.
The first two-thirds of Irving’s longish novel is about the barely credible 1960s sex life of a self-obsessed, self-indulgent bisexual schoolboy in a dysfunctional family within a malfunctioning community. I understand that in that post-war period, sexual divergence from what was seen as the norm was still an emotional trauma for young men and women but I could not get the sense that the boy’s approach to the problem or the ambience of the place he lived in was authentic.
The first-person narrator’s grandfather is a partly repressed homosexual; his two female cousins are gay; his mother was the “victim” of a teenage encounter with his father, a younger gay boy; the school wrestling team is predominantly gay, as is the friend he travels to Europe with; and the town librarian is a transsexual, albeit one of the few engaging characters in the novel.
The hero, using the word in the literary sense, crusades endlessly for tolerance for the sexually different, but only after he finally grows up in the last quarter of the book does he begin to understand that maybe some seeming bigots are victims of their own emotional traumas, which might have been as harrowing as his own.
It was only in this last part of the book that I was truly engaged. The characters are more real and diverse. As AIDS ravaged New York – the author claims that by 1995 more Americans had died of the devastating disease in that city alone than were killed in Vitenam – an uncomprehending and largely unsympathetic public looked away. It was a tragic and horrible price to pay but, if there is an upside, it is that gradually most Americans began to understand that there is no normality, that the right to private sexual expression in any form without violence or exploitation is a fundamental human freedom.
One thing that surprises me about Irving is his frequent use of italics to put stress on a word in sentence, usually the bad habit of an amateur.

Footnote:
Gordon McLauchlan is an Auckland-based writer and commentator, and an occasional reviewer of this blog.
Posted by Beattie's Book Blog at 6:46 am