TIME MAGAZINE JULY 28, 2008 ISSUE
Three stories in particular in the latest issue caught my eye:
Warming to the Kindle
Like so many gadget geeks, I am fickle. I fall in love--a sucker for sharp curves that gleam--get bored, then quickly move on to the next new thing. 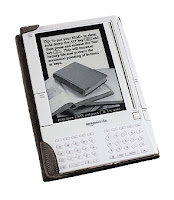 The Kindle was different. I disliked almost everything about Amazon's handheld digital reader from the moment I saw it. But eight months into our relationship, I've found its hidden charms. My antipathy has flowered into something. Could it be a pure and lasting gadget love?
At first, I hated that the control buttons made it too easy to inadvertently page forward, backward or--if you hit the Back button--somewhere else entirely.
I didn't like that it displayed black type on a gray background. (You can't beat black type on a white page.) The battery stank. When I'd put the Kindle in sleep mode and leave it for a few days, it was usually dead on my rearrival. Soon I consigned it to the Quittner Closet Where Old Gadgets Go to Die.
Then one day a few months ago, a friend e-mailed me a manuscript of his first book.
It's torture plowing through 350 pages on a computer, and I was too cheap to print it out. So on a lark, I forwarded the document to Amazon, which converts such things into Kindle-book format for free; minutes later, I had a lovely version on the device.
And since I like to get something for nothing, I downloaded from other sites a dozen great, free novels, ranging from James Joyce's Ulysses to Cory Doctorow's recent sci-fi novel, Little Brother. The giveaways motivated me to meet the Kindle halfway by figuring out how it wanted to be used rather than how I had expected to use it.
For the complete story by Josh Quittner go to Timeonline.

HOW FICTION WORKS
A whole page devoted to a review by Lev Grossman of this title. Published by Farrar, Straus & Giroux in the US, the edition being reviewed, this title by James Wood,was published earlier this year by Jonathan Cape in the UK at which time it received extensive review coverage in the UK media.
Cover in pic left is the Cape edition.
Link here for The Guardian review.

AUCKLAND BOOKSHOP/CAFE
I don't recall ever seeing an New Zealand bookstore featured in Time magazine before so well done to Baci Lounge (a name derived from books, art, coffee inc.). http://www.baci.co.nz/
Baci Lounge is the brainchild of 41 year old physician and author Sharad Paul and is located in the Rialto Centre in Newmarket and is recognised as a place to shop for unusual reading, especially Indian literature, with a free cup of coffee with book purchases.
Posted by Beattie's Book Blog at 11:56 am

As I work at Baci Lounge, I was thrilled to see your mention of Baci in your blog as well as the lovely article in Time. It's great to see that bookstores are still alive and kicking despite the onslaught of the "technology age". Hopefully we will see you in store sometime soon.