Kevin Ireland - Reasons to be cheerful
This marvellous piece by NZ Herald books editor Linda Herrick was in the Weekend Herald's Review section. 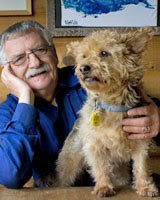 Kevin Ireland and Sydney (left) at home in Devonport. Photo / Richard Robinson
Devonport writer Kevin Ireland turned 75 on July 18. He celebrated in style with a five-hour lunch with friends, then slept like a baby and awoke the next morning feeling great. Today, he has reasons to feel more sunny again after reeling over the sudden death of his wife Caroline last November. He and Caroline, who had been together for 40 years, had moved to a smaller, more modern house in Devonport, while their son and his family moved into their old villa around the corner. "We thought we'd better downsize," he says, "but I didn't know we'd be downsizing quite so much".
After the shock of Caroline's death, from a brain aneurism, Ireland is bouncing back. He has just returned from a 10-day trip to Florence, where he gave a keynote address at the conference of the NZ Studies Association in conjunction with the Centre for NZ Studies at Birkbeck, University of London. The conference is a jolly affair where academics and writers from around the world gather to discuss urgent matters such as "Italy in the Maori Imaginary: the Novels of Witi Ihimaera" and "Odysseus in the Land of Kupe".
Ireland's speech was more simply titled, "Coming to terms with the Med".
Read the rest of Linda Herrick's story at the New Zealand Herald online.
Posted by Beattie's Book Blog at 3:31 pm