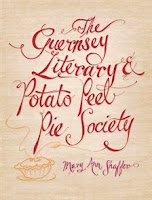 I predict that this utterly delightful and charming book will become something of a phenomenon by year’s end with sales, hugely assisted by word of mouth enthusiasms, running into the hundreds of thousands, perhaps even millions.

Let me start by quoting the publisher’s afterword:

The Guernsey Literary and Potato Peel Society is a first novel from a 70-year-old former librarian, Mary Ann Shaffer. She first became interested in Guernsey when visiting London in 1976. On a whim, she decided to fly to Guernsey but became stranded there as a heavy fog descended and no boats or planes were permitted to leave the island. As she waited for the fog to clear, she came across a book called Jersey Under the Jack-Boot, and so her fascination with the Channel Isles began.
Many years later, when goaded by her own book club to write a book, Mary Ann naturally thought of Guernsey. She chose to write an epistolary novel because, ‘for some bizarre reason, I thought it would be easier that way’.
First her family, then her writing group, and then publishers around the world greeted her manuscript with avid enthusiasm, recognizing that they had found a true gem.
Not long after the sale of her manuscript, 70-year-old Mary Ann’s health declined, and her niece Anne Barrows, a successful YA author in her own right, undertook the author edits. Tragically, Mary Ann died early in 2008 without seeing her book in print, but she has left the world an unforgettable legacy – the heartwarming, moving story of The Guernsey Literary and Potato Peel Pie Society.

How sad, but her story is a triumphant one, a simple and captivating tale of love and friendship and books, a story told entirely by way of letters. It is set in Guernsey and London and takes place between January and September 1946. I read it in two long sittings and was totally enchanted.
Every book group in the English speaking world will be selecting this title once the word is out.
And as a bonus it comes in a handsomely designed, chunky, and most appealing hardback package.
My congratulations to Australian publishers Allen & Unwin on a fine piece of publishing, it is not often fiction is treated with such care.
Don’t miss this one, everyone is going to be talking about it.
FOOTNOTE
Jan of Poppies Bookshop in Hamilton tells me she has sold a shedload of the title already and it is only just out. This is the copy from her website:
A glorious, gorgeous, completely irresistible novel, Guernsey will win hearts everywhere.
An affecting, emotional epistolary novel recalling the charm and warmth of 84 Charing Cross Road and the gentle wit of Alexander McCall Smith, Guernsey tells the story of a small group of neighbours on the island of Guernsey off the coast of England, a pig farmer, an elegant lady, a potion maker, a rag and bone man, a footman posing as a lord who survive the Nazi occupation in the second world war by gathering over humble potato peel pie to talk of Shakespeare, Chaucer, and the great novels.
With the war over, Juliet, an eager writer from London, uncovers just how dramatic the lives of these islanders really were during the war, and through them, discovers the drama in her own life.
Guernsey is a real gem of a novel. It's that rare thing: a small story, simply told, that contains within it enormous depth and heart. Completely accessible and immediately captivating, the characters are nothing short of enchanting. Gloriously honest, moving, sweet and funny, a sheer delight from beginning to end, this is truly a book to fall in love with.

I warmly endorse these comments, and was also reminded somwhat of 84 Charing Cross Road, and I reckon this new title will enjoy a similar sort of international success.
Here is Jan's own review:
This is absolutely delightful and is my favourite book so far this year. A writer looking for inspiration for her next book finds it unexpectedly in a letter from a man she has never met but who has come across her name written in a book by Charles Lamb. In an exchange of letters she becomes drawn into the Group, founded after the war and finally goes to Guernsey to meet them. In a less skillful writer the device of letters can be clumsy but here it works superbly. The characters are so human they leap off the page.
This book is a must read. It is charming, witty, warm and in short an absolute treasure. This is going to be huge. A glorious, gorgeous, totally irresistible novel, that will win hearts everywhere. Gloriously honest, moving, sweet and funny, a sheer delight from beginning to end. I loved this book and was sad to get to the final page and leave my friends behind.
Posted by Beattie's Book Blog at 1:59 pm