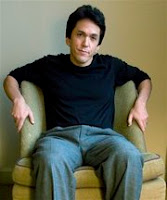 By HILLEL ITALIE, AP National Writer Thu Jul 17, 2008
NEW YORK - Mitch Albom (pic left) has a new book out — well, not really a book, but a commencement speech in book form. And not in traditional book form, but as an e-book, published exclusively through Amazon's Kindle reader.
Commencement Speech To His Nephew's Graduating Class: May 30, 2008, Nice France" went on sale Thursday for 99 cents. It won't be a money maker for Albom — proceeds are being donated to a Detroit-based charity for the homeless — but it does offer a test for the digital device that has created a great debate about the future of books and great speculation over how much the Kindle is part of that future.

Amazon.com has declined to offer specific numbers for the Kindle, a vacuum eagerly filled by industry insiders and the media, which has estimated sales as anywhere from a very modest 10,000 to a more encouraging 100,000-plus.
E-books are unquestionably growing although public sightings of the Kindle remain rare enough that one blog, Silicon Alley Insider, announced last month, "Imagine our delight when we got on the subway, sat down, and saw a person reading an Amazon Kindle — right in front of us! — for the first time since it launched last November."
Albom's speech could be a way to measure the Kindle connection. He is a brand-name author whose million sellers include "Tuesdays With Morrie" and "The Five People You Meet in Heaven." The text of his speech, less than 4,000 words, is brief for a traditional book, but ideal for a quick read on a portable device.
"We thought doing it through the Kindle would be an exciting way to bring readers to Mitch and to his work," Albom's agent, David Black, told The Associated Press, adding that there were no immediate plans to expand the speech and release it on paper.
For the full story from AP via Yahoo News link here.
Posted by Beattie's Book Blog at 8:14 am