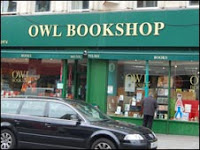 Clubbing together to beat the big boys

Gary McLaren has been working at the Owl Bookshop in Kentish Town in North London for longer than he is prepared to say, although he admits to having been there more than 15 years.
Owl Bookshop faces competition from a Waterstone's less than a mile away
"It is difficult keeping going and the High Street changes through time," he says.
"You just have to make sure you're serving what people want rather than trying to force something onto people."
Independent bookstores face a constant problem that they are not able to negotiate with publishers to secure the same discounts on books as their bigger competitors such as Waterstone's, Amazon or the supermarkets.
Local indie booksellers here in New Zealand will tell you they face exactly the same problem.
This story is from the BBC News, link here to read their full report.
Posted by Beattie's Book Blog at 8:17 pm