Looking for an e-readership
Sony's e-reader was launched today through Waterstone's. Will this spark a bookish revolution?
July 24, 2008 by John Sutherland. English lecturer, emeritus professor, Guardian columnist and author. 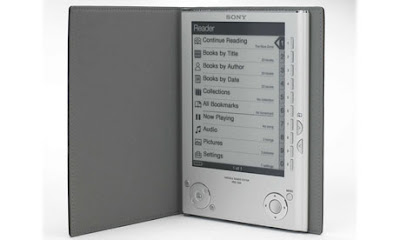 The most authoritative history of the book that we have opens, laconically: "About the year 1450, some rather unusual 'manuscripts' made their appearance in the northern regions of Western Europe." Thus began the print revolution. In the year 2008, a rather unusual "book" made its appearance in Britain's walk-in and click-in bookstores.
The e-reader.The retail chains, and Amazon, have decided to blitz the consumer with Sony, Kindle, and iLiad. Many users will, however, like me, first come across these nifty gadgets in institutional sites: through their educational establishments, or offices.
It's significant, for example, that CNN has - for about a year now - been pushing an array of e-readers on Richard Quest's "Business Traveller" slot. As Richard informs us (with that somewhat irritating bubbliness), they're easily packed, and they're packed not just with airport reading but invaluable factual information. If you're travelling to Tokyo for the first time, wouldn't you find a shelf-full of professional guidebooks helpful?
Read John Sutherland's full essay here.
Posted by Beattie's Book Blog at 8:22 pm