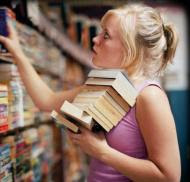 MY FAVOURITE pre-holiday activity is browsing in my local bookshop for poolside reads. So what if there aren't four floors of books to choose from? Sometimes being confronted with too much choice is like struggling through a menu that runs to a dozen pages. All that flipping back and forth, your previously empty and rumbling stomach now churning madly in confusion.
Choice can be fantastic - like nipping into Tam Shepherd's for a Captain Hook's hook and being offered a selection of five different models.

Other times, tiny is good. Curiously, even in a bookshop that's smaller than your average living room, you always find something to buy.
Before having children, I have to admit that I rarely ventured into a local bookshop. My novels were bought at various enormous stores - mainly close to Piccadilly Circus where I worked. Then our twins arrived, and Piccadilly Circus might as well have been Pluto in terms of how feasible it was to get there. Which was unfortunate, as what most new mothers need is a darn good book to reassure them that they're not failing dismally as parents if they're not massaging their young charges thrice daily.
Read the rest of Fiona Gibson's thoughtful essay online.
Posted by Beattie's Book Blog at 6:46 am