Literacy Debate: Online, R U Really Reading?
By MOTOKO RICH writing in The New York Times, July 27, 2008
Books are not Nadia Konyk’s thing. Her mother, hoping to entice her, brings them home from the library, but Nadia rarely shows an interest.
Instead, like so many other teenagers, Nadia, 15, is addicted to the Internet. She regularly spends at least six hours a day in front of the computer here in this suburb southwest of Cleveland. 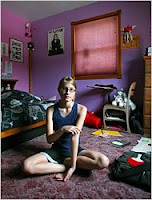 (Pic left from NYT) A NEW GENERATION Nadia Konyk, 15, has a small book collection but prefers reading online.
A slender, chatty blonde who wears black-framed plastic glasses, Nadia checks her e-mail and peruses myyearbook.com, a social networking site, reading messages or posting updates on her mood. She searches for music videos on YouTube and logs onto Gaia Online, a role-playing site where members fashion alternate identities as cutesy cartoon characters. But she spends most of her time on quizilla.com or fanfiction.net, reading and commenting on stories written by other users and based on books, television shows or movies.
Her mother, Deborah Konyk, would prefer that Nadia, who gets A’s and B’s at school, read books for a change. But at this point, Ms. Konyk said, “I’m just pleased that she reads something anymore.”
Children like Nadia lie at the heart of a passionate debate about just what it means to read in the digital age. The discussion is playing out among educational policy makers and reading experts around the world, and within groups like the National Council of Teachers of English and the International Reading Association.
Read the rest of this important story online.
Posted by Beattie's Book Blog at 3:13 pm