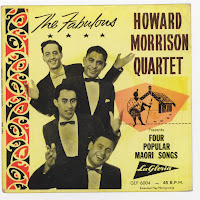 Chris Bourke will be giving a talk on Maori pop in Auckland during the 1950s at the New Gallery, Auckland, on Sunday 27 July.
The talk will feature material from the book he is currently writing on the early years of popular music in New Zealand. Formerly the producer of RNZ National's Saturday Morning programme, Bourke is currently the writer-in-residence at the University of Waikato.
Among the topics covered in the talk will be the impact of the Maori Community Centre (until recently on Fanshaw Street), the emergence of the showbands and rise of the Howard Morrison Quartet. The talk is part of the exhibition "Turuki! Turuki! Paneke Paneke! - When Maori Art Became Contemporary" currently on at the New Gallery.
This celebrates a turning-point in New Zealand's art history: in 1958 the first contemporary Māori art exhibition was staged at the Princes Street Adult Education rooms, University of Auckland. It featured then-unknown talents such as Ralph Hotere, Katerina Mataira, Muru Walters, Arnold Manaaki Wilson and Selwyn Wilson.

This image of the Maori Hi-Fives (left) is from the June, 1963 cover of 'Te Ao Hou', the magazine produced by the Maori Affairs Dept from 1952 to 1976. The entire run has been digitised and can be read on-line at the National Library website.
Talk: Chris Bourke on Maori pop in Auckland, 1950s.
Where: New Gallery, Auckland Art Gallery (enter from the corner of Lorne St and Khartoum Place).
When: Sunday 27 July, 3.00pm. The talk is free, but requires entrance to the exhibition ($7).