Legendary art commentator, author and boulevardier Hamish Keith returned to national attention last year when his television series and accompanying book, The Big Picture, seized the imagination of New Zealanders.
The high-rating show and bestselling book rekindled fresh enthusiasm for the complex and fascinating story of our art heritage and cemented Keith's stature as one of our most engaging, confronting and witty cultural commentators.
On the back of the success here of The Big Picture, Hamish Keith has now been invited to the UK, as a guest of the Centre for New Zealand Studies, at Birbeck College, University of London, where he will present two lectures and screenings of a couple of episodes of the TV series, this November. 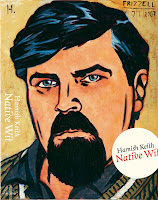 Keith, who has his much-anticipated autobiography, Native Wit, out later in September, says he’s looking forward to seeing how the expat community, with the benefit of distance, responds to his view of the themes and issues, as he sees it, which have shaped and forged our cultural heritage over the past four hundred years.“I started to put The Big Picture together in London thinking a distant and alien viewpoint might clear the view of our culture. It did. At the same time it also made the British orientated view of our lives – which my parents generation had accepted without question - seem even more alien and more distant than it always had to me. It will be an interesting experience to take that view – the book and the television series - back to London and see what they make of it.”
Plans are also underway to have an event at Philip Thwaites’ Pacific Playhouse while he’s over there. The Bookman will keep you posted.
Footnote:
Thwaites of course is a well-known former New Zealand bookseller but has lived in London now for many years. One suspects that he and Keith will make a formidable pair on the streets of London.
Posted by Beattie's Book Blog at 12:07 pm