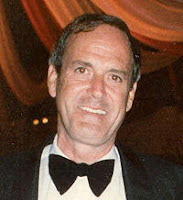 More Bang for the Book

By RACHEL DONADIO
Published in The New York Times: July 27, 2008
John Cleese may be best known for his goose step in Monty Python’s “Ministry of Silly Walks” sketch and as the zany hotel owner in “Fawlty Towers,” ’70s-era British television comedies that played up the weirdness lurking beneath petit-bourgeois conventions. These days, Cleese has a new gig: teaching businesses how humor can “unleash creativity” and how creativity can lead to “better and more enjoyable customer service.”
Yes, it has come to this.
But Cleese, who wrote the self-help books “Life and How to Survive It” (1993) and “Families and How to Survive Them” (1984) with the psychiatrist Robin Skynner, isn’t the only author to step behind the lectern. In recent years, a growing number of writers, from the best-selling to the less so, have hit the rubber-chicken circuit, speaking at colleges and businesses, chambers of commerce, trade fairs and medical conventions. While a midlist novelist might ask, though not necessarily get, $2,500 per appearance, a superstar presidential historian might command $40,000. And some best-selling authors charge double that.
The venues can range from the upstanding (libraries, churches) to the downright weird. “Once, back in the ’80s, I spoke at a ‘motion upholstery conference’ in North Carolina,” the author Roy Blount Jr. said in an e-mail message. “Motion upholstery,” he explained, means “chairs that tilt back or vibrate or turn into beds.” He learned something at the conference: “Just as fish can’t see anything funny about water, people in the motion upholstery field don’t respond to jokes, however inspired, about motion upholstery.” Blount said speaking fees helped put his children through college. “Then I drifted away from it,” he said. “Now I’m doing it again; the money is a comfort in my golden years.”
For the full NYT story link here.
Posted by Beattie's Book Blog at 1:52 pm