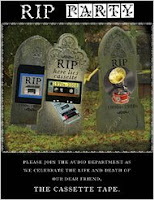 Say So Long to an Old Companion: Cassette Tapes

By Andrew Adam Newman writing in The New York Times.
There was a funeral the other day in the Midtown offices of Hachette, the book publisher, to mourn the passing of what it called a “dear friend.” Nobody had actually died, except for a piece of technology, the cassette tape.
While the cassette was dumped long ago by the music industry, it has lived on among publishers of audio books. Many people prefer cassettes because they make it easy to pick up in the same place where the listener left off, or to rewind in case a certain sentence is missed. For Hachette, however, demand had slowed so much that it released its last book on cassette in June, with “Sail,” a novel by James Patterson and Howard Roughan.
The funeral at Hachette — an office party in the audio-book department — mirrored the broader demise of cassettes, which gave vinyl a run for its money before being eclipsed by the compact disc. (The CD, too, is in rapid decline, thanks to Internet music stores, but that is a different story.)
Read the full piece at the NYT online.
Posted by Beattie's Book Blog at 7:47 pm