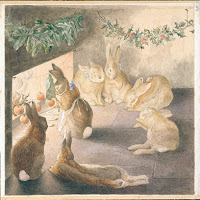 At Sotheby’s London sale on 17 July, Beatrix Potter’s original watercolour illustration for the final scene from “The Rabbits’ Christmas Party” sequence sold for the remarkable sum of £289,250 – almost five times its pre-sale high estimate (est. £40,000-60,000) – setting a new record for any book illustration sold at auction.
The watercolour was one of 20 original illustrations, books, unpublished Christmas cards and letters by Beatrix Potter that originate from the collection of the artist's brother, Bertram Potter (1872-1918), which were offered for sale in today’s auction of English Literature and History.
The whole collection, which represents the most extensive group of Beatrix Potter artwork to have appeared on the market in living memory, realised a total of £748,200. From the same collection, an abandoned watercolour for The Tale of Peter Rabbit, which was later redrawn for publication, sold for £32,450 - more than double its pre-sale low estimate (est. £15,000-20,000). This earlier version has never been reproduced and is the only contemporary Beatrix Potter illustration for her Peter Rabbit likely to be offered for sale.
Above story from Ibookcollector Newsletter #123
To Contact Ibookcollector
Ibookcollector © is published by Rivendale Press Ltd.
Footnote:
The image shown above is not the one that has been auctioned but rather is from the V&A and is one of a set of four watercolours by Beatrix Potter showing the successive stages of a Christmas party. Here the rabbits are roasting apples on the hearth. These pictures were given to Beatrix Potter's aunt, Lady Roscoe, wife of Sir Henry Roscoe. The date of these watercolours is unknown although the series pre-dates the publication of the 'Tale of Peter Rabbit' in 1901 when Beatrix had begun publishing some of her rabbit drawings as Christmas cards.
Posted by Beattie's Book Blog at 12:56 pm