COVER STORY THIS WEEK'S NEW YORK TIMES BOOK REVIEW
By George F. Will, Published: May 11, 2008
Rick Perlstein’s sprawling, rollicking book arrives hard on the heels of a contest of empathy-exhibitionism in which the two Democratic presidential candidates competed to see who could more ardently adore churchgoing, gun-owning, not-at-all-bitter working-class Pennsylvanians. Perlstein’s readers will learn why this happened. He shrewdly quotes a commentator’s assessment of Richard Nixon’s 1952 Checkers speech with its maudlin reference to his wife’s “Republican cloth coat”: “Dick Nixon has suddenly placed the burden of old-style Republican aloofness on the Democrats.” 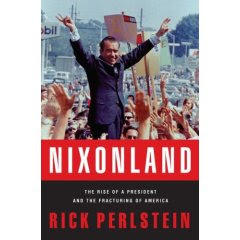 NIXONLAND
The Rise of a President and the Fracturing of America.
By Rick Perlstein.
Illustrated. 881 pp. Scribner. $37.50.

Link to the NYT for the full review.
Posted by Beattie's Book Blog at 8:35 am