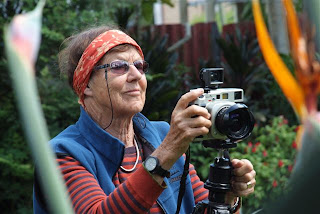 GIL HANLY PHOTOGRAPHER
She seemed to be everywhere, and indeed she was. As official photographer at the Auckland Writers & Readers Festival this past week Hanly captured on her large SLR digital camera every single person who participated. She filled four DVD's and a few CD's with images for the Festival organisers.(I wonder what the Festival organisers do with them?).
Hanly pic of Paula Morris and Hermione Lee 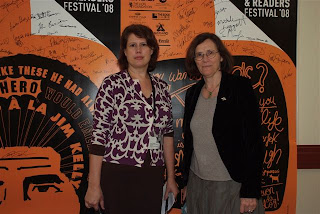 Hanly has done many things during her working life and indeed when Bookman Beattie first joined Penguin Books way back in 1977 she was the text book buyer at the University Bookshop, a hugely responsible position which she carried out with great skill. Most of us in the publishing world were slightly fearful of her! Woe betide you if your company's text books were delivered late for the start of the university year.

Around this time she became a part-time photographer and then in 1984 she made the move to working fulltime in the field.
Over the years since she has focussed on social, political & environmental issues but in the course of attending hundreds of theatre and gallery openings from which she has gathered thousands of shots, and of course she is recognised as New Zealand's leading garden photographer having made major contributions to many superb books.

Currently she is the Patron for the Auckland Festival of Photography (30 May-22 June) and has an exhibition at the Auckland Museum - Nuclear Free:Protest Photography by Gil Hanly.
Two years ago she was made one of the Auckland City Mayor's Living Legends and here is the citation read out at the presentation:
Gil Hanly is one of Auckland's living treasures.
She and late husband, New Zealand artist, Pat Hanly have made a huge contribution to the arts scene in Auckland.
For 40 years, as a professional photographer Gil has documented nearly every social, political and environmental issue of the nation - particularly Auckland. She has used her images of women and peace to highlight topical issues to a wider New Zealand audience in order to create change.
Her photos have appeared in many publications from The Listener and Metro magazine to Craccum (Auckland University). Books such as Water Gardening in NZ, Peace is More than Absence of War and Auckland Trinity Gardens have featured her work. She won a Media Peace Prize in 1985.
Gil has specialised in the latter part of her career on gardens and she has been part of a movement in this country to highlight ordinary people's work in their gardens and encourage them into the gardening world.
At 72, Gil is still working. Her lifetime work warrants recognition as a Living Legend.
Gil, photographer extraordinaire and old friend, I thank and salute you for your huge contribution to the Auckland Writers & Readers Festival, and to the community at large. You are indeed a Living Legend.
Posted by Beattie's Book Blog at 8:37 am

Gil is a magnificent artist. A truly inspiring person.

Thanks for this insight into the lovely lady behind the camera at the Auckland Writers & Readers Festival. It was great to learn more about her and she certainly deserves the accolade. She was a vital part of the festival atmosphere and popped up everywhere!