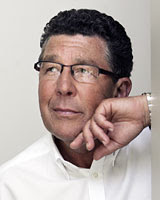 PAUL HOLMES DISPLAYS HIS IGNORANCE & ARROGANCE
IN THE HERALD ON SUNDAY
Here he is in the final paragraph of his weekly column:
If I see a book that has won a Pulitzer Prize, I always get it. It will always be a stunner. If I see it has won the Booker Prize I know it will be a bore of a thing and avoid it like the plague. Ditto the recommendations of the Listener or the Sunday Star Times, both of which might one day start to review the books that people read. Or at least the books that men read.
My suggestion to Holmes is that he sticks to waffling on about current affairs on talk-back radio rather than making himself look a prize dork with nonsense like this.
Photo by Doug Sherring, NZ Herald.
Posted by Beattie's Book Blog at 1:14 pm

What do you mean? He's the columnist of the year writing in the newspaper of the year.

But seriously, he's a chimpanzee with a typewriter and the less attention we give him, the better.

However, it would be fascinating to know what Holmes would make of Junot Diaz's The Brief Wondrous Life of Oscar Wao. That's a Pulitzer Prize winner but it doesn't fit his narrow "books for men" brief - he's talking about histories of Napoleon not good literary fiction. Hence his typically uninformed dismissal of the Bookers.

He's got a point. The listener should review more 'popular' or 'genre' fiction.