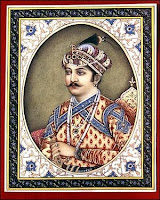 THE written record cannot be trusted in Salman Rushdie’s newest novel, “The Enchantress of Florence,” a story that roams from the red sandstone palace of the great Mughal emperor Akbar to the towered Palazzo in Machiavelli’s Florence. One character is erased from official history, a second is imagined into existence, a third is hopelessly mischaracterized.

Author pic, Dave Benett/Getty Images
It is a situation with which Mr. Rushdie is all too familiar. In books and periodicals, photographs and newspapers (like this one) that capture fragments of contemporary life, he is well known to millions of people who have never read him as a damnable blasphemer of Islam, an arrogant and ungrateful British subject, or a member of a literary Brat Pack with a preference for young models.
“A cartoon of yourself is created, then it is used to attack you with,” Mr. Rushdie said over a lunch of steak tartare, French fries and a Diet Coke on the Upper East Side of Manhattan.
Read the full New York Times story........
Posted by Beattie's Book Blog at 8:17 pm