NEW YORK (AP) - Eloise, the Plaza hotel's most famous fictitious resident, has officially returned to the storied landmark following a $400 million renovation -with a portrait of the mischievous 6 year old prominently displayed near its famous Palm Court dining room.

Actress Jordana Beatty poses for photographers after the unveiling of a portrait of Kay Thompson's character "Eloise" at the Plaza Hotel Wednesday, May 14, 2008 in New York. (AP Photo/Mary Altaffer) 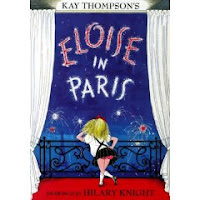 Beatty was on hand for the unveiling ,the 9-year-old Australian actress who will play Eloise in the upcoming feature film adaptation of "Eloise in Paris," opposite Uma Thurman.
"Children of all ages have been asking for Eloise and it is our pleasure to have her call The Plaza home once again," said Shane Krige, the hotel's general manager.
The portrait was returned to its original spot on a wall outside the sumptuous restaurant, whose stained-glass ceiling, covered with plaster in the 1940s, was uncovered and restored during the two-year renovation.
The Plaza, a National Historic Landmark, first opened in 1907. It officially reopened to the public on Sunday after its new owners, Elad Properties, converted the hotel's original 805 guest rooms into 282 hotel rooms and 181 condominiums.
Read the full story..........
Posted by Beattie's Book Blog at 12:37 pm