By Richard Russo writing in The New York Times, june 1, 2008

“Dear American Airlines,” Jonathan Miles’s fine first novel, takes the form of a letter to the titular air carrier, which has stranded Benjamin R. Ford, the book’s middle-aged protagonist, in O’Hare Airport on the way to his estranged daughter’s wedding. One doesn’t take this premise literally, of course. As Bennie waits to be put on another flight, he has a lot of time on his hands, enough to miss first the rehearsal dinner and then the “wedding” itself (quotation marks courtesy of Benjamin, who’s just found out that his daughter is marrying a woman), but not enough to write a novel. The premise works though, because, as anyone who’s ever been stalled in an airport knows, time crawls. It feels like eternity, 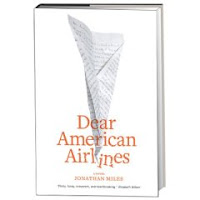 DEAR AMERICAN AIRLINES
By Jonathan Miles.
180 pp. Houghton Miffin. $22.
Related
The Book's Web Site
and once Bennie has cussed out the air carrier — energetically, colorfully, inventively — for its lying, cynical, careless ways (yes, exasperated fellow travelers, Bennie’s venting is a lot of fun) and demanded his money back, there’s plenty of fictional time left to reflect upon his entire crappy life to this crappy point, which he does. Indeed, airport time goes so slowly in the “purgatory” of O’Hare that there’s plenty left over for Benjamin, a former poet who now works as a translator, to read and translate large sections of a Polish novel, as well as to digress into an impressive array of cultural issues, large and small. Bennie’s digressions don’t all advance the story, but they’re great fun and serve an important purpose by lightening the narrative load.
For the full review go to the New York Times online.
Footnote:
This I have to read!
Posted by Beattie's Book Blog at 9:39 am