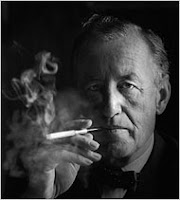 By John F.Burns writing in The New York Times, May 19, 2008
LONDON — Any writer who has struggled to “do the words” would take heart from the self-effacing assessment written for himself by Ian Fleming, the raffish Englishman born 100 years ago this month who became one of the most successful authors of his time through the creation of the world’s best-loved spy, James Bond.
Fleming died in 1964, at 56, of complications from pleurisy after playing a round of golf in Oxfordshire though he had a heavy cold. But the real culprits were years of smoking up to 80 cigarettes a day, and a fondness for drink. Perhaps because of the difficulty he found in resisting life’s indulgences, he adopted a strict writing routine in his last 12 years, the period in which he wrote more than a dozen Bond novels that spawned the multibillion-dollar film franchise.
Author pic, Getty Images, from The New York Times, where you can read the full story online.
Posted by Beattie's Book Blog at 3:39 am