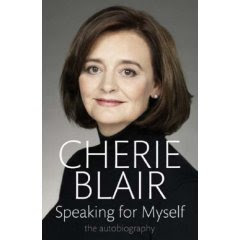 SPEAKING FOR MYSELF: THE AUTOBIOGRAPHY
By Cherie Blair, Little, Brown & Co
Did you read ths review by Barbara Ellen in The Observer last Sunday, or the New Zealand Herald yesterday, May 23? It has to be one of the most devastatingly harsh reviews I have read in many a long year. Look for the book in remainder piles before long.............
Oh, Cherie! As the journalist from the 2003 "Lippygate" story, I was there when Cherie Blair let in Marie Claire (myself and photographer Jane Hodson) to observe her having her lipstick applied by the "Juicy Couture Rasputin", Carole Caplin, on the PM's bed.
At the time, I found Cherie "flawed, shrill, a charm-free zone", as well as "weird and inappropriate" (at one point clutching my arm in the back of a car and roaring show tunes into my face).
Most of all, I saw Cherie as "wrenchingly innocent" when dealing with journalists - the "ultimate New Labour Icarus free-falling from grace under a suddenly hostile media sun". Well, free-falling is one thing - five years later, with Speaking for Myself, Cherie Blair/Booth/whatever appears finally to have landed, and with quite a splat.
The full review from the NZ Herald
And here is a slightly kinder review from The Independent.
And from The Times which says the author has nothing to say, and says it badly.
Posted by Beattie's Book Blog at 7:25 am