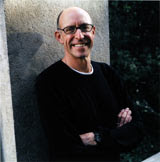 AN HOUR WITH MICHAEL POLLAN
AT THE AUCKLAND WRITERS & READERS FESTIVAL
Wow, what a guy. Michael Pollan proved to be a real star turn, a real pro, a man on a mission with a cause in which he passionately believes.
Simon Wilson, food writer and former Cuisine magazine editor, was the perfect guy to chair this inspiring session and he made a great fist of it. After Wilson listed Pollan's five books, and quoted briefly from reviews of each, our author read a piece from his second last title, The Omniv

ore's Dilemma, and then Wilson skilfully led him into a conversation about his latest title, In Defense of Food, and its thesis which was suggested could be summed up in seven words - Eat food, not too much, mostly plants.
He was the consumate public speaker, he had us all, (and there were a lot of us), in the palm of his hand and I found myself hanging on to every word. Absolutely brilliant.
This was my final session at the Festival and it was a great way to go out from what has been an outstanding Festival on every count. Tomorrow I will attempt to summarise the wonderful past five days at the Festival and pass out my annual bouquets and brickbats.
But tonight I will sleep like a baby I am sure.
Footnote:
I spent nearly $300 on books at the Festival but I didn't have to buy In Defense of Food as I bought the hardcover edition in New York at Christmastime. It is a most thought provoking read.
And a great report on this session in today's New Zealand Herald.
Posted by Beattie's Book Blog at 7:55 pm

Michael Pollan -who i esteem - has left out one word in his mantra:
"Eat food."
Yep, real food is way better that masscrap nastinesses.
"Mail plants."
Of course! That's what our species has always fed on majorly!(Even, latest findings, our neanderthal cousins-)
"Not too much."
Well, the 'much' and the 'hy of eating thereof' are debatable-
but - he left out the best reason - after sheer survival- for eating!
It is

As a fastidious foodie who really doesnt like restaurants but adores good food (and enjoys it as often as I can - like daily) all I can add to this post is-enjoy!