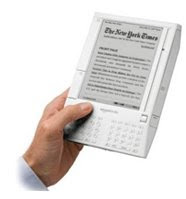 e $399 Kindle launched last November and sold out in hours. Amazon sorted out its supply chain and manufacturing problems, and the device was back on sale in April.
Amazon spokesman Drew Herdener said Tuesday that Amazon's cost of manufacturing the Kindles dropped as it increased the number produced. He would not say how many of the e-book readers have been sold to date.
The Kindle's new $359 list price is still higher than Sony Corp.'s competing Reader, which retails for $299.
Posted by Beattie's Book Blog at 7:45 am