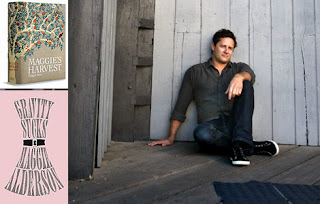 Putting art on their sleeves
Sydney Writers' Festival: Susan Wyndham reveals the secrets of the year's best book covers.
Looking good … Reuben Crossman, who's design for MoVida won three awards. Inset: Daniel New's award-winning cover designs for Maggie's Harvest and Gravity Sucks
It is hard to believe Daniel New when he says, "I like simple ideas." His design for Maggie's Harvest by Maggie Beer, which has been named best-designed cover in the Australian Book Design Awards, takes cookbooks to a new level of lushness.
New, 36, is a senior designer for Penguin Australia, where he works on many illustrated food and travel books in the imprint Lantern. When the publisher, Julie Gibbs, asked for something "special" for Beer's book, he thought of screen-printing on fabric an illustration of a pheasant in a tree.
But Gibbs demanded something "more special", suggesting he try an embroidered fabric cover, which she had seen on a small-edition book from Penguin UK. Doing that for an edition of 50,000-plus books was a challenge but New and the production team had the covers embroidered, padded and bound in China.
"I didn't change my design one bit," he says. Each $120 copy has a protective coating but, New says, "it's going to look beautiful even when it gets grubby".
Cookbooks have been frequent winners in the Australian Publishers Association's design awards. Another has overtaken even New's beautiful creation to take this year's awards for best-designed cookbook and overall best-designed book of the year. MoVida: Spanish Culinary Adventures also helped win Reuben Crossman, 33, the title of young designer of the year.
The full report from the Sydney Morning Herald.
Posted by Beattie's Book Blog at 3:50 pm

Would you like to review my book? I'll send you a copy if you want.