Potter Was Still Magical, but Not All Books Rose
Story from The New York Times overnight.


J. K. Rowling may have given a much needed jolt to the publishing industry last July when the final installment in her celebrated series about the boy wizard, “Harry Potter and the Deathly Hallows,” sold 8.3 million copies in the United States in 24 hours, but publishers still struggled to sell more books overall than they did in 2006, according to the Book Industry Study Group, a publishing trade association. 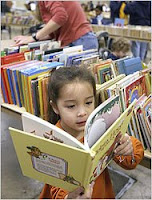 Publishers sold 3.13 billion books last year, compared with 3.1 billion in 2006, an increase of just 0.9 percent, according to Book Industry Trends 2008, an annual report that analyzes sales in the United States. Higher retail prices helped net revenue increase 4.4 percent, to $37.3 billion, from $35.7 billion.
The news is unlikely to surprise publishers as they gather in Los Angeles Friday for the second day of BookExpo America, the industry’s yearly convention. Booksellers, librarians, authors, agents and reporters are bouncing through a whirl of parties, celebrity appearances (the artist now known again as Prince, Alec Baldwin and Ted Turner are among those showing up) and author book-signings while being bombarded with advance copies and marketing for books slated for the fall season.
The full NYTimes story here.
Posted by Beattie's Book Blog at 7:46 pm