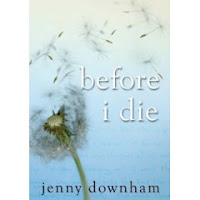 Longlist announced for Guardian Children's Fiction award
Claire Armitstead writing in The Guardian, Friday May 23, 2008
One of the publishing sensations of the last year becomes just a little more sensational tomorrow when Jenny Downham is shortlisted for the Guardian Children's Fiction award for her first novel, Before I Die.
Downham, a 43-year-old former actress who lives in London, finished writing Before I Die on the last day of February 2007. Seven days later it was snapped up by publisher David Fickling, and by mid-March it had sold in 10 languages.
To read the full story go to The Guardian online.
Before I Die joins six other books on the longlist for the Guardian Children's Fiction Prize. They are Cosmic, by the screenwriter and novelist Frank Cottrell Boyce; The Goldsmith's Daughter, by Tanya Landman; Bad Blood, by Rhiannon Lassiter; Bog Child, by Siobhan Dowd; The Knife of Never Letting Go, by Patrick Ness, and The Knife that Killed Me, by Anthony McGowan.
And for Bookman Beattie's review of Before I Die written in December 2007 link here.
Posted by Beattie's Book Blog at 7:44 am