A continuing love affair
Deborah Cassrels writing in The Australian

BALI-BASED author Janet De Neefe appears to have the sort of life - infused with passion, exotica and fairytale romance - many would die for.
Janet De Neefe , left, - Author, Artist, Literary festival director
So when we meet in Bali I ask the Melburnian expat if this is true. "Yes, definitely, it's magical," she says with a laugh. 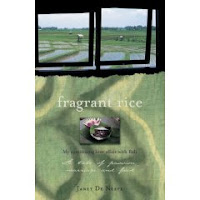 And why wouldn't it be? The island, with its vibrant culture, people and cuisine, home to De Neefe for more than 20 years, continues to weave a rich, creative tapestry through her life.
Fragrant Rice: My Continuing Love Affair with Bali, a combined memoir, recipe book and insight into the culture, was published in 2003. Now she's writing the sequel, a classic tale tracing three generations of women: her Balinese mother-in-law, herself and her two daughters, centring on the traditional v the modern. But she admits the book is in its early stages. "Who has time to write?"

De Neefe, 49, director of the annual Ubud Writers & Readers Festival, is busy planning authors and logistics for this year's event, having wrapped up 2008 in a back-to-back schedule that leaves her limited time for other work.
She founded the festival after the 2002 Bali bombings to attract people back to the island and boost the economy. "Out of tragedy good things can happen," she says.
Read the full story at The Australian online.
Footnote:
Janet de Neefe was a guest at the Auckland Writers and Readers Festival in 2007.
Read The Bookman's coverage of the session in which she appeared as a panellist here.
Posted by Beattie's Book Blog at 7:27 am