Here were four highly accomplished food writers talking about food, and what a rollicking good, mouth-watering time they gave the 400 of us present on this Sunday morning, the final day of the Festival. The chemistry within the group was wonderful.

Full marks to Lauraine Jacobs who was both Chair and a participant. She was well-prepared, warm & relaxed in her manner and much of the success of the session was due to her direction.Having said that however, each of the others - Sarah-Kate Lynch, Julie le Clerc, and Janet De Neefe were all stars in their own rights.

Lauraine has been a food editor at Cuisine for over 20 years and has recently published The Confident Cook, a large sumptuous and immensely practical book featuring over 130 of her favourite recipes many of which have appeared in Cuisine over the years.I was given this book at Christmas and reviewed it on my blog.

Sarah-Kate Lynch, The House of Peine, is not only a terrific writer whose food novels have enjoyed great sucess world-wide, she is also a natural comic and she had the audience and her fellow panellists in stitches on a number of occasions. She is off to London in a week or so to launch The House of Peine over there and to research her next book which is going to be set in a London teahouse.We wish you well Sarah-Kate.

Julie le Clerc is the author of many cookbooks, her latest being the truly stunning Taking Tea in the Medina which was one of the first books I reviewed after starting this blog back in late October last year. She is also Food Editor for the NZ Woman's Weekly. She is Cordon Bleu trained as has been a caterer, and cafe owner but these days is a fulltime writer. 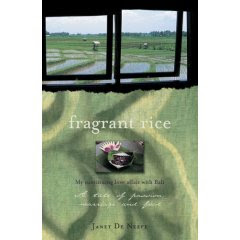 Janet De Neefe was born and educated in Melbourne, Australia and fell in love with Bali while on holiday there with her family back in the 70's. She returned in the 80's, fell in love and married a Balinese and has lived there ever since in the gorgeous city of Ubud. These days she runs a restaurant, cookery school, guesthouse and homeware store and somewhere in between she found time to write Fragrant Rice which I will write about once read but a quick skim suggests that it is a memoir with a generous selection of Balinese recipes. Annie and I tried to get into her cookery school on a visit to Ubud but there were no vacancies. Having now listened to her and met her and bought her book we have promised ourselves we are going back but this time we will book for the school in advance.
Well with that lineup of talent it is not surprising the event was so successful. Led by Lauraine Jacobs they discussed a wide range of subjects including the food they ate as children and the influences of family on their later cooking as adults, their food heroes and mentors, recipes, travel, nutrition, and oh so much more.
On the way out Annie said "Wonderful, butI feel so hungry now".
Skilled food writers had proved they were also skilled food talkers. A great session.