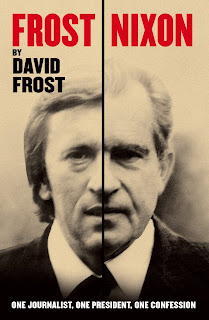 Following the resounding success of the eponymous West End and Broadway play, FROST/ NIXON, tells the extraordinary story of how David Frost pursued and landed the biggest fish of his career and produced one of the most dramatic pieces of television ever broadcast.

It was published in 2007 and of course since then the movie has arrived and is currently showing around the world. Pan Books have wisely reissued the book to coincide with the new wave of interest in the earlier events.

In his author’s note David Frost tells us that this book is a sequel to his 1977 title on the Nixon interviews, I Gave Them A Sword. He explains he has added the story of Nixon in retirement and an assessment of the Nixon presidency as seen from the vantage point of 2007 rather than 1977.
He has also included, for the first time, five transcripts from discrete parts of the interviews – not only Watergate and Vietnam, but also the Huston Plan, Henry Kissinger and Chile.

Nixon seems to be attracting a lot of attention just now. I notice in the issue of the NZ Listener out this week David Cohen has two pages reviewing:
Nixonland: The Rise of a President and the Fracturing of America
Rick Peristein (Scribner NZ$49.99)
and
The Invincible Quest:The Life of Richard Milhous Nixon
Conrad Black (Quercus NZ$69.99).
Posted by Beattie's Book Blog at 7:15 am