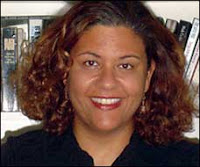 Carol Rumens writing on her blog in guardian.co.uk, Wednesday 21 January 2009

The African praise song traditionally celebrates the life of an individual, giving their name, genealogy, totem animal, job, personal attributes, etc in a rhythmical, incantatory, call-and-response style. To use this ancient form was an idea with exciting potential, but, as it turned out, the title of Elizabeth Alexander's inauguration poem was more inspired than the poem itself. Readers looking at the transcript might be asking if it's a poem at all. With its long prosy lines, this praise song is closer to a speech than a song.
Read Rumen's full comments, and watch a video of Alexander delivering the poem here.
Posted by Beattie's Book Blog at 7:09 am