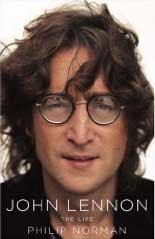 Lennon book: 'There were so many ways in which John influenced the late 20th century'
Philip Norman talks to Jon Dennis about his new biography John Lennon: The Life
Jon Dennis in guardian.co.uk,
Wednesday 14 January 2009
Philip Norman's book John Lennon: The Life is already being hailed by Beatles fans as the definitive book about the late Beatle. His 1981 book Shout! The True Story of the Beatles is regarded as the definitive book on the group.
In a wide-ranging interview, Norman discusses Lennon's life and loves, and explodes various myths about John.
He wasn't unloved as a child - in fact, various members of his extended family loved and supported him.
Lennon's relationships are explored - including the truth about his notorious holiday to Spain with manager Brian Epstein and allegations that an unprovoked attack by Lennon may have caused Stuart Sutcliffe's death from a brain haemorrhage.
* Warning: this interview contains strong language. Link here to The Guardian for the interview and mp3 download link.
And for reviews from The Observer, The Telegraph, and Word magazine.
And the book is warmly recommended by Dymock's Doris Mousdale.
Posted by Beattie's Book Blog at 7:57 am