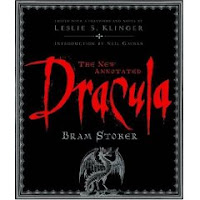 From The Times
January 9, 2009
The New Annotated Dracula by Bram Stoker, edited by Leslie S. Klinger with an introduction by Neil Gaiman
From Bram Stoker's monstrous, bloodsucking count to Stephenie Meyer's supernatural teen heart-throb, vampires have long exercised a powerful grip on our imagination, says Leslie Klinger
“The Dead Undead” was Bram Stoker's working title for Dracula, but the living undead would be a better description of the current state of the vampire. On the page and on the screen, the creature who defies death but depends on the living for sustenance - your basic blood-sucking fiend - is back with a vengeance.

Stephenie Meyer's supernatural romances, which occupy the top three slots in this week's bestsellers charts, are at the peak of a new surge of vampire lit - a movement that includes Darren Shan's Demonata horror tales, Charlaine Harris's Southern Vampire mysteries, and Charlie Huston's series about an undead private investigator. Although fanged monsters have fascinated us for more than 2,000 years, their shape has shifted, and the modern vampire, more often than not, is a sexually-charged, seductively attractive and heroic figure.
Read the full story at The Times online.
Posted by Beattie's Book Blog at 7:18 am